Here’s a game that’s made only for a select audience. This doesn’t mean that if you’re not among the people that are in this select audience, you can’t play this game. It means that if you are indeed in the select audience; you will love this game. There are several reasons why this is the case; and we’ll delve into them a bit deeper in this article below. For now, you should be aware that this game was created by the company called NetEnd, a company that creates some of the best online casino games that you can find.

As you can divine from the name of this particular slot machine, the slot is centered on the famous, legendary guitarist called Jimi Hendrix. This is a person that has forever revolutionized the playing of a guitar, and he has millions of fans all around the world, to this very day. So, this game is a homage to his talent. The thing that we’ve mentioned in the introductory paragraph; that this game is made for a select audience only, is due to the following. The entire game is designed in a psychedelic theme.

There are flashy, rosy colors and the background is all psychedelic. So, if you’re not a fan of psychedelic drugs, or of Jimi Hendrix’s music, then it’s understandable that you may happen to not like this game. But in all other cases; you will love the graphic and music of this game. Right at the outset you will witness a pretty epic introductory video; where an animated Jimi Hendrix plays his music. If this doesn’t get you pumped for the game – nothing will

There are different types of symbols in this game, and they all have their respective values – you can check the information on this on the pay table. The symbols vary – some are outright psychedelic: you can see an eye, or a flower, or a heart on the reels. Or you can see the image of Jimi Hendrix, or of the classical card numbers, aces, kings, queens and jacks. This game has 20 pay lines, and they are fixed. 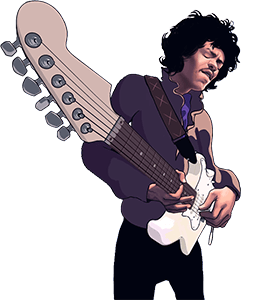 There are a few bonuses at the Jimi Hendrix slot game. You activate the bonus option if you hit three scatter lines on the reels. Then you will play a pick and click game where you will select your bonus. You can get the Crosstown Traffic Free Spins, the Purple Haze Free Spins and the Little Wing Free Spins.

You will get a variable number of free spins, on different reels and rows, depending on the free spin bonus that you get. There’s also a wild symbol which can take up the place of any other symbol needed for a winning combination. As expected, this is the symbol of Jimi Hendrix’s face.

While this is not a game for everyone. Jimi Hendrix fans and fans of psychedelics will rejoice at the opportunity to play such a game. Be sure to have fun with it!